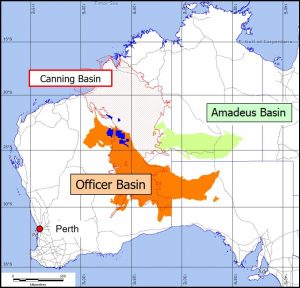 Reward is the first company to explore for potash in the Browne Formation of the Officer Basin. It developed a thesis that the Brown Formation (Gibson area) was the source of WA’s palaeovalley brine SOP deposits, which it is currently drill-testing.

Located in the Gibson Desert, some 400km east of Newman, the area historically had limited oil and gas exploration which intersected evaporates hundreds of metres thick in some places. The Officer, Canning and Amadeus Basins are all known to be large sedimentary evaporite basins. 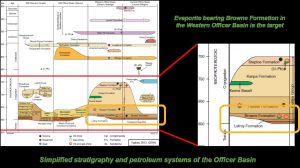 Seismic data indicates the potential for near surface Browne formation evaporites over a wide area of Officer Basin, hence Reward’s focus. The program attracted up to $200,000 of co-funding via the State Government’s Exploration Incentive Scheme (EIS) Co-funded Exploration Drilling Program.

Reward has a land position (directly and indirectly) in excess of 8,500km2 at its Midway Well and Madley Prospects in the Gibson Area of the Officer Basin, where the Browne Formation occurs at shallow depth and even outcrops in numerous locations. It is the erosion of these outcropping Browne Evaporites that could be the source of WA’s palaeovalley brine SOP deposits such as Lakes Disappointment, Dora and Auld.

Given that WA’s brine deposits are high in Sulphate Reward believes that this could imply that the Browne Formation in this area has the potential to host potash deposits similar to the Danakil depression located in the Horn of Africa.

Stay up to date an all the latest company information and ASX announcements.